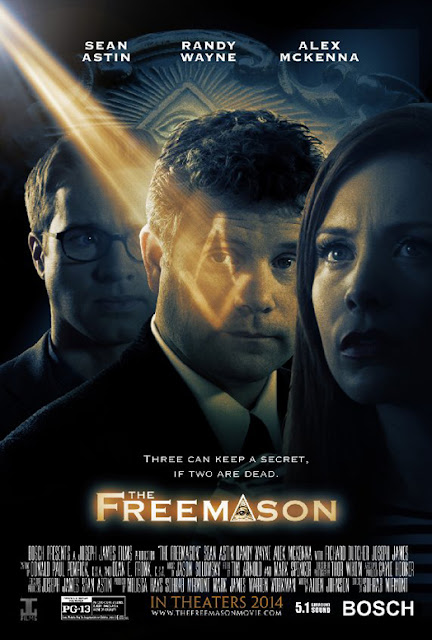 Directed by Sohrab Mirmont, and written by Allen Johnson, The Freemason (2013) was shot over a period of just 12 days. The finished product is remarkable and entertaining, all the more impressive when considering the limited budget and time constraint. The film's executive producer, Joseph James, is a real-life Master Mason and 32° Scottish Rite Freemason. He served both as a content consultant to ensure fidelity to the Craft, and as a supporting actor, playing Masonic character Jericho Beck. The subject matter of Freemasonry is shrouded in secrecy and oaths, and Joseph James made sure to walk a careful line between showing too much and not enough… condensing some of the ritual elements into a more cinematic version of Blue Lodge initiation. The story centers on the murder of a wealthy Mason, found brutally bludgeoned beside the Lodge altar. The investigation pairs a common-sense cop with a gifted journalist, intertwining mystery and esoteric symbolism in a volatile mixture involving Alchemy and a subversive Order within the Masons called Sanctum Aurum or "Holy Gold." The cast does a great job, including Sean Astin (The Goonies, Lord of the Rings), Randy Wayne, Alex McKenna and Richard Dutcher.


Posted by Travis Simpkins at 2:00 AM