"The Man Who Made Vermeers" by Jonathan Lopez 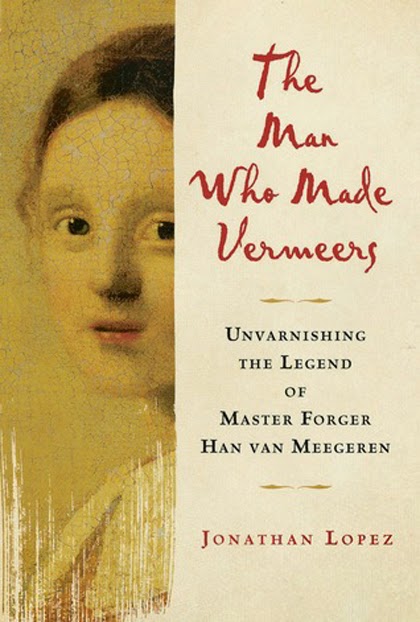 "The Man Who Made Vermeers: Unvarnishing the Legend
of Master Forger Han van Meegeren"
by Jonathan Lopez
Harcourt, 2008
Review by Travis Simpkins

It makes for a great story: Han van Meegeren, a talented artist that feels shunned and disheartened by hoity-toity critics, fools the art world into accepting his newly-forged paintings as authentic 17th Century Vermeer masterpieces… conning everyone, including the Nazis, who pay exorbitant prices for his worthless fakes. Put on trial for selling Dutch national treasures, the artist reveals that the paintings in question are fake and that he painted the phony masterworks himself. The idea of a master forger getting the better of those who are inclined to disenfranchise others in undeniably appealing. However, according to author Jonathan Lopez, the myth is just that: pure legend and mostly untrue. In his 2008 book, The Man Who Made Vermeers: Unvarnishing the Legend of Master Forger Han van Meegeren, Lopez makes a pointed effort to render the truth bare in regards to what many consider the biggest art fraud of the 20th Century. In reality, there was no noble mission behind van Meegeren's Vermeer forgeries, it was all about money… and lots of it. Ever the opportunist, he was caught while catering to the occupying Nazi regime, a despicable element of which he was entirely complicit and sympathetic. Most prior attention had been directed at his late-life World War II era Vermeers, but as Lopez points out, van Meegeren had been in the business of making phony masterworks almost from the beginning of his artistic career. Despite having a lucrative set-up as a Dutch society portrait painter, van Meegeren soon discovered through a network of crooks, that there was a great deal of cash to be had in forging masterpieces. Forged works in the style of Frans Hals and lesser known masters fell under the radar at the time and are still popping up on occasion today. Han van Meegeren's stroke of genius when it came to his fake Vermeers was that he gave the art world exactly what it wanted. He exploited an artist that had recently returned to vogue, and of which little was known… and he created a whole series of religious paintings to coincide with a fictitious period in Vermeer's career. With a few shrewd and suspicious exceptions, like Joseph Duveen for example, the critics and dealers bought the whole phony deal. Overcoming the scientific hurdles of chemical testing proved only mildly problematic for van Meegeren. Unlike old hardened paint, new oil paint dissolves in alcohol. A gelatin-glue medium was concocted. It was impervious to alcohol, but grew spongy when water was applied. So, van Meegeren utilized a fairly-new material called Bakelite (created from carbolic acid and liquid formaldehyde) that passed every test. One fake Vermeer after another was authenticated and sold. Some, like The Supper at Emmaus and The Lacemaker, have now become iconic. The newly-available supply of Vermeers whet the ravenous collector's appetite of Hermann Goering, who purchased a van Meegeren forgery… and signaled the faker's rapid demise. Well-written and carefully documented, Jonathan Lopez's book is admirable in it's mission to set the record straight, accomplishing it's goal with informative style.