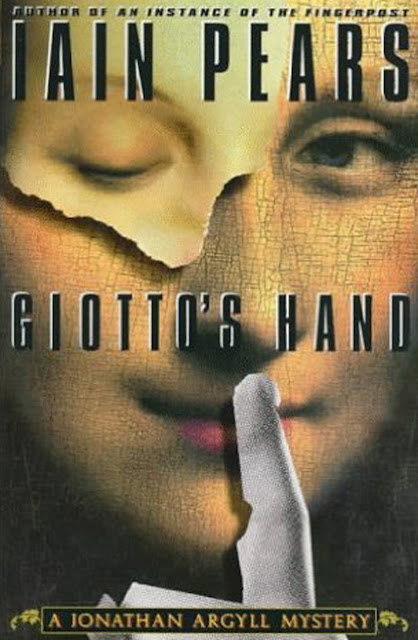 Giotto's Hand, the fifth installment in the Jonathan Argyll and Flavia di Stefano art crime / mystery novel series by Iain Pears, combines art theft with notions of perceived social status and misguided criminal preconceptions. The story picks up where the previous novel, The Last Judgement, left off. British art dealer Jonathan Argyll is living in Rome with his girlfriend, Flavia di Stefano, of the Italian art theft squad. Under pressure from the bureaucratic administration, General Bottando feels compelled to produce results and reexamines a case that stretches back thirty-years… involving a series of art thefts, begun in 1963, perpetrated by a master thief who has been nicknamed "Giotto" due to his mysterious nature. Little evidence can be traced, as Giotto cleverly targeted small works from undocumented private collections, with no photographs of the works to go on. One by one, at irregular intervals, small works by Uccello, Fra Angelico, Pollaiuolo, Diego Velasquez and others have vanished from European manors and palazzos without a clue left behind. Now, an embittered old woman on her deathbed may hold the information the detectives need to unmask the elusive Giotto. The investigation leads from Rome, to Florence, to a countryside Manor House in the village of Weller in Norfolk, England. There, in addition to finding clues related to Giotto and getting involved in a murder investigation, Jonathan Argyll may have discovered a long-lost masterpiece by Leonardo da Vinci. Full of details derived from the imagination of a keen art historian, Iain Pears' work is masterful and creates a wondrous 224-page literary sojourn.