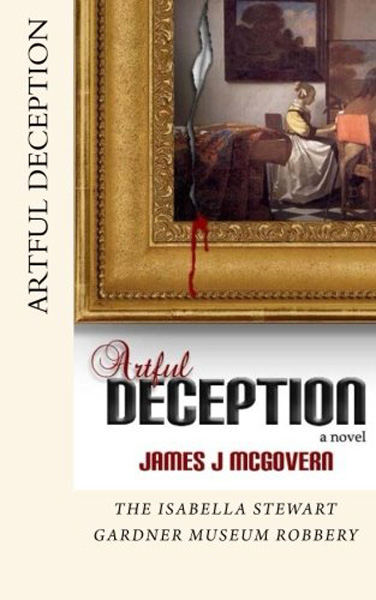 Written and released in an effort to draw attention to the case, Artful Deception by James J. McGovern is a work of historical fiction centered on the 1990 robbery of 13 masterpieces from the Isabella Stewart Gardner Museum in Boston, Massachusetts. While serving with the United States Attorney's Office in 2006, McGovern was given the opportunity to re-examine the evidence in the cold case. The background of the theft remains true to the case, but fiction enters when McGovern offers a plausible solution… one involving corruption and cover-ups within the top echelon of FBI investigative authority in Boston during the late 1980's and early 1990's.
Because of the fictional elements, the names of the characters were changed, but those familiar with the case will find them easy to decipher (Jimmy "The Tooth" Kelly is Whitey Bulger, Kyle Condon is Myles Connor, Jay Fager is Ray Abath, Willie Lewis is William Youngworth, William "Slick" Feldman is George Reissfelder, David Mercer is David Turner, Bryan Mullen is FBI Agent Geoff Kelly, Anthony Fenore is Anthony Amore, etc.).
All in all, Artful Deception is an enjoyable work offering a literary edge to one of Boston's most enduring mysteries and one of the art world's greatest tragedies. McGovern's straightforward writing style compliments the real-life noble efforts of those still working to solve the case and return the artworks to the walls of the Isabella Stewart Gardner Museum.