"The Gnostic Gospels" by Elaine Pagels 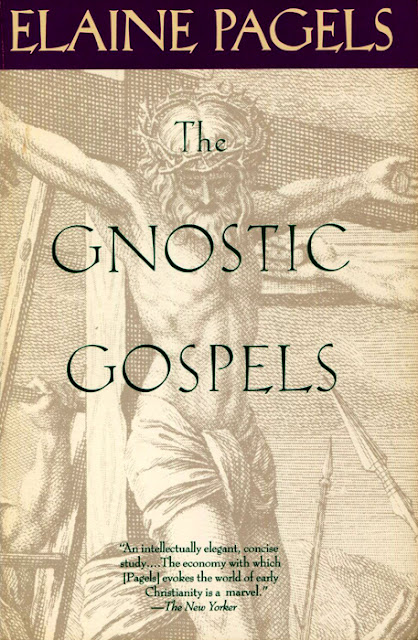 Brilliant and concise, The Gnostic Gospels by Elaine Pagels remains one of the best sources for both an introduction and thoughtful interpretation of the Nag Hammadi codexes. The book was the winner of the National Book Award and has been placed on lists of the Greatest Books of the 20th Century. I have no intention of critiquing an established and indispensable text, but rather place here some favorite and useful quotes from this wonderful work:

- To know oneself, at the deepest level, is simultaneously to know God; this is the secret of gnosis. The self and the divine are identical.

- The "living Jesus" of these texts speaks of illusion and enlightenment, not of sin and repentance, like the Jesus of the New Testament. Instead of coming to save us from sin, he comes as a guide who opens access to spiritual understanding.

- All who had received gnosis had gone beyond the church's teaching and had transcended the authority of it's hierarchy.

- Achieving gnosis involves coming to recognize the true source of divine power- namely "the depth" of all being. He has come to know his true Father and Mother. The Redemption is the release from the Demiurge's power. A declaration: "I am a son from the Father- the Father who is preexistent… I derive being from Him who is preexistent and I come again to my own place whence I came forth."

- Some confessed Christ in the superior way, "in faith and conduct throughout their whole lives."

- Gnostic Christians assert that what distinguishes the false from the true church is not its relationship to the clergy, but the level of understanding of its members, and the quality of their relationship with one another… united by gnosis.

- True testimony: when man knows himself, and God who is over truth, he will be saved. Only those who come to recognize that they have been living in ignorance, and learn to release themselves by discovering who they are, experience enlightenment as a new life, as "the resurrection." Physical rituals like baptism become irrelevant, for the baptism of truth is something else; it is by renunciation of the world that it is found.

- Interpretation of the church as a temple: those who were ordinary Christians, not yet gnostics, worshipped in the temple courtyard, shut out from the mystery. Only those who had gnosis might enter within the "holy of holies," which signified the place "where those who are spiritual worship God."

- Many gnostics insisted that ignorance, not sin, is what involves a person in suffering... Whoever remains ignorant, a "creature of oblivion," cannot experience fulfillment.

- Kingdom of God is a state of self-discovery, symbolizing a transformed consciousness… Whoever perceives divine reality "becomes what he sees."

- Whoever comes to experience his own nature- human nature- as itself the "source of all things," the primary reality, will receive enlightenment. Realizing the essential self, the divine within, the gnostic laughed in joy at being released from external constraints to celebrate his identification with the divine being.