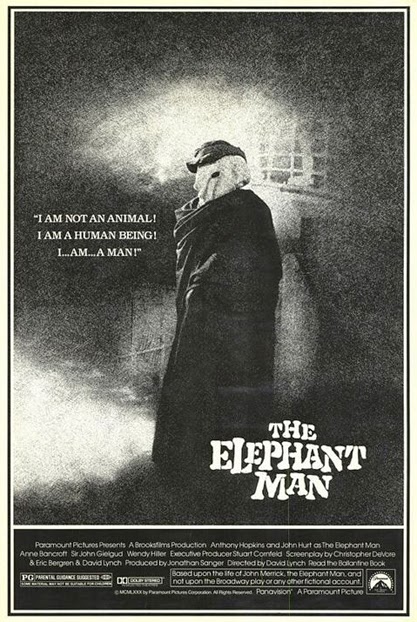 Co-written and directed by David Lynch, in his second film, The Elephant Man (1980) tells the true story of Joseph Merrick (referred to as John in the script), a severely deformed man suffering from neurofibromatosis and/or Proteus syndrome, living and being exhibited as a human Freak curiosity in 19th Century Victorian London. Mel Brooks produced the film, but kept his name off the project so that audiences would not expect a comedy. The black and white cinematography is artful and the film perfectly captures the period detail of the Victorian era. Anthony Hopkins is excellent as Dr. Frederick Treves. John Hurt is superb, under heavy make-up and prosthetics, as John Merrick "The Elephant Man." The supporting cast is great as well, including John Gielgud, Anne Bancroft and Wendy Hiller. The film was a huge hit, nominated for several Academy Awards, and a novelization of the script followed.

Posted by Travis Simpkins at 3:30 AM