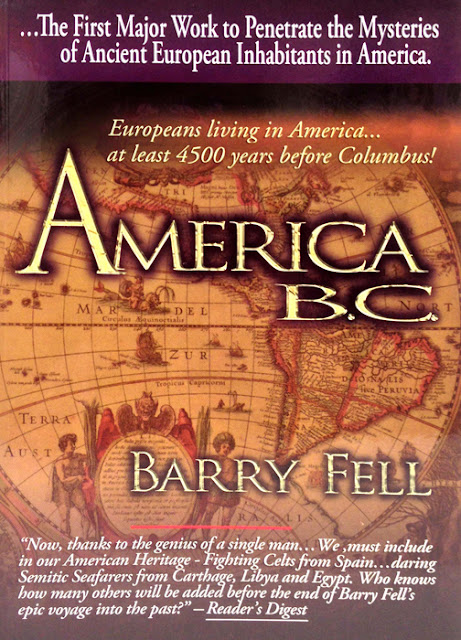 In the opening pages of his landmark 1976 book, America BC, Barry Fell states: "America, as we now realize, is a treasure house of records of man's achievement upon the high seas in bygone ages. Even more so are our inscribed rocks and tablets a heritage from a forgotten era of colonization." Thus begins his thesis that North America was visited, explored and inhabited by Europeans and others long before Columbus set sail in 1492. The bulk of Fell's text centers on the ancient Celts, who Fell believes settled areas of present day New England in about 800 B.C. Various stone chambers found in the eastern woods are testament to their presence and present historical and cultural evidence of their handiwork. The complex of stone chambers and monuments at Mystery Hill (now called America's Stonehenge) in Salem, New Hampshire are central to Fell's research and provide the most intriguing clues to support his theory… including a sophisticated positioning of the stones to correspond to astronomical alignments that facilitate a religious purpose and serve as a practical calendar.
Long stretches of dry analysis that examine the ancient system of Ogam language and writing utilized by the Celts comprises a large part of the text. Such details might not interest the casual reader, but provide necessary background information to support Fell's hypothesis. He concludes, "We find in New England some two hundred stone chambers, many of which are oriented and constructed in such manner as to make them serve as astronomical observatories for the regulation of the calendar of festivals. There are also systems of standing stones that indicate a calendar divided into eight half-seasons, all based on the annual cycle of the sun's motions in the sky… we are obliged to conclude that they are the work of ancient Celts."
The 294-page book also makes reference to the Phoenicians and the Egyptians as other ancient visitors to the New World and provides some artifacts to support this, but maintains that these other groups mainly sought to deal in trading with the resident Celts. Suffice to say, many critics have dismissed Fell's work as being fanciful and far-fetched. All in all, the book, which differs greatly from mainstream historical teachings, presents an interesting case that if read with an open mind, can offer serious pause for thought.