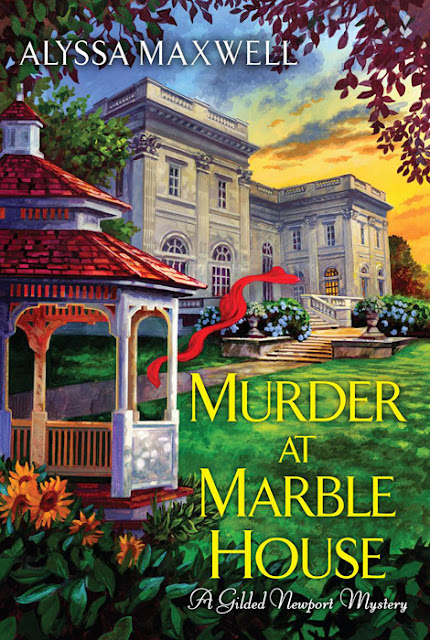 The historic figures of late 19th Century Gilded Age Newport spring to life in Murder at Marble House by Alyssa Maxwell. Social standing, reputations, guarded inhibitions and self-protectiveness associated with the prominent members of society and their family fortunes are threatened by a murder investigation and possible abduction at one the town's most elegant estates. Set in the late summer of 1895, the story centers around the impending forced engagement of heiress Consuelo Vanderbilt to the Duke of Marlborough. Young reporter (and Vanderbilt cousin) Emma Cross is hastily called to Marble House, where she once again stumbles upon a murder scene… this time it's an invited fortune teller found strangled in the garden pavilion and young Consuelo is missing. A maid, first at the murder scene, is the prime suspect. Throughout the fast-paced plot, Emma, who believes in the maid's innocence, takes it upon herself to both investigate the crime and locate Consuelo. She ventures behind the curtains of Newport glitz and gaiety to uncover the unpleasant truth.
Full of interesting twists and well-rounded characters, Alyssa Maxwell's novel masterfully interweaves story elements to bridge the murder-mystery and historical fiction genres. I particularly enjoyed the portrayals of actual historic figures of the time: Cornelius Vanderbilt II, Alva Vanderbilt, William K. Vanderbilt, Consuelo Vanderbilt and Winthrop Rutherfurd. The dialogue seems natural and instills a lively spirit to the still faces usually only seen in yellowed photographs. Well worth the cover price, the book makes for an entertaining and engaging 305-page literary sojourn.