"The Jewel of Seven Stars" by Bram Stoker 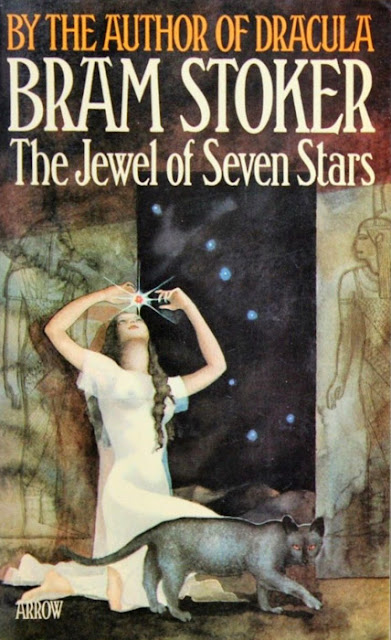 The Jewel of Seven Stars
by Bram Stoker
first published by Heinemann, 1903
Notes by Travis Simpkins

Egyptomania was in full swing during the late 19th and early 20th Centuries. Archaeological discoveries in Egyptian tombs sparked the interest of scholars and travelers around the world. With the inherent mysteries that accompanied the finds were fanciful rumors of the so-called "Mummy's Curse" which fascinated the public and created a new genre of horror storytelling, first in novels and later in cinematic form. Bram Stoker, the renowned author of Dracula, capitalized on the craze by publishing The Jewel of Seven Stars in 1903.
A masterwork by all standards, the novel is both compelling and entertaining. The plot centers on a love-stricken young man, who is drawn into an archaeologist's plan to revive Queen Tera, an ancient Egyptian mummy, by means of a ceremony utilizing carefully orchestrated mystical arts pre-ordained by the Queen herself. Beneath the gripping narrative are veiled themes of feminism, societal progress and the rise of the New Woman which were slightly ahead of their time.
The Jewel of Seven Stars is a true Classic and is amongst Bram Stoker's best work.

"We learn of great things by little experiences. The history of ages is but an indefinite repetition of the history of hours. The record of a soul is but a multiple of the story of a moment. The Recording Angel writes in the Great Book in no rainbow tints; his pen is dipped in no colours but light and darkness. For the eye of infinite wisdom there is no need of shading. All things, all thoughts, all emotions, all experiences, all doubts and hopes and fears, all intentions, all wishes seen down to the lower strata of their concrete and multitudinous elements, are finally resolved into direct opposites." (Chapter XVIII)