"The Lost Order" by Steve Berry 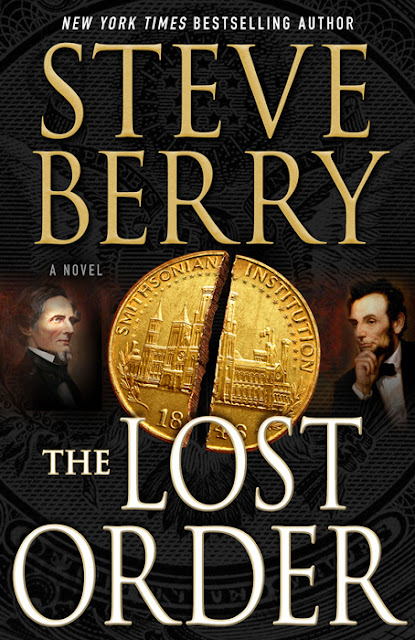 The Lost Order is the twelfth book in the "Cotton Malone Series" by Steve Berry. As in other installments in the popular series, this plot is a top-notch thriller that combines clever contemporary storytelling with mysterious historical subject matter. The focus of The Lost Order is on the Knights of the Golden Circle, a clandestine organization that amassed billions of dollars worth of gold for the Confederacy before and during the Civil War. The gold was hidden, hoarded away in secret stashes throughout the South and much of it has never been found. Carved stones with cryptic symbols and maps, if deciphered, will point the way to the treasure. Retired agent Cotton Malone is called upon by the Smithsonian Institution to help investigate new developments regarding the Order, both in terms of the whereabouts of the gold as well as Political ramifications of the group's philosophy in present day Washington, D.C. Malone is aided in his quest by a former US President, and hindered by disputing factions within the Knights themselves.
Fast paced and intriguing, the story is helped along by the descriptive settings (particularly the various Smithsonian museum buildings) which feature so prominently as to become integral elements within the plot. As expected, real life history mixes with historical fiction. To give away too much here would be a disservice to the book, which contains many surprises throughout it's 484 pages. Well worth the price and the time spent reading it.