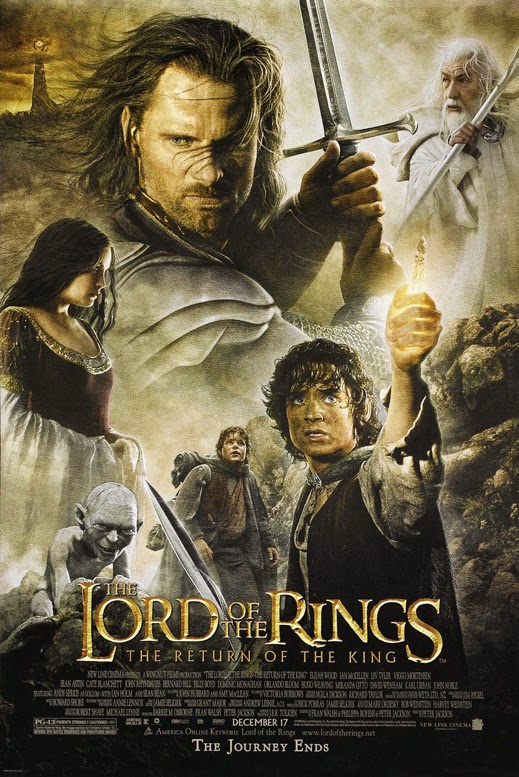 Directed by Peter Jackson, based on the novel by J.R.R. Tolkien, The Lord of the Rings: The Return of the King (2003) was the epic conclusion to the saga put forth in The Hobbit and The Lord of the Rings movie franchises. The film won the Best Picture Academy Award, the first and only time a fantasy film has done so, but the trophy was more in recognition of the grand accomplishment of the whole Lord of the Rings trilogy… the entire sum of it's parts. The story picks up where the last film left off, with Frodo Baggins and Samwise heading to destroy the One Ring in Mordor. Meanwhile, Aragorn, Gandalf and Legolas battle the Orc armies of the Dark Lord Sauron in an epic battle for Middle Earth. As in the previous installments, medieval historic elements and Celtic mythology make appearances in the aesthetic look of set design, arms and armor. The CGI effects are amazing, and the films deserve every bit of the praise they receive. The cast does a wonderful job in reprising their roles, including Elijah Wood as Frodo Baggins, Viggo Mortensen as Aragorn, Liv Tyler as Arwen, Ian McKellan as Gandalf, Sean Astin as Samwise, Orlando Bloom as Legolas, Cate Blanchett, John Rhys-Davies, Bernard Hill, Billy Boyd, Dominic Monaghan, Hugo Weaving and Ian Holm.

"The Lord of the Rings: The Return of the King"

Posted by Travis Simpkins at 2:00 AM