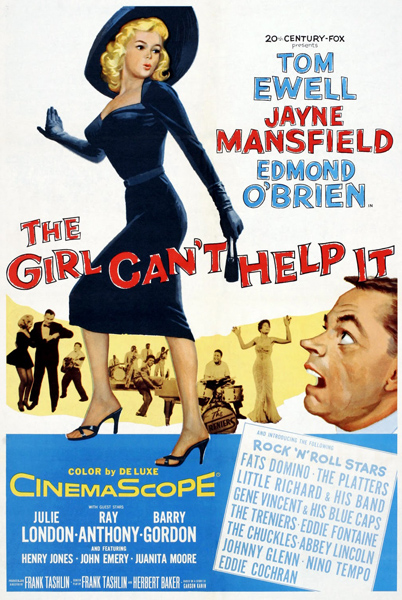 Directed by Frank Tashlin, The Girl Can't Help It (1956) was a major star-making vehicle for Jayne Mansfield and unintentionally became one of the most prominent showcases of early real-life Rock & Roll talent. The story concerns a mobster who hires an agent to turn his sexy girlfriend into a star. Proving that she was more than just "The Poor Man's Marilyn Monroe", Jayne Mansfield proved that she had legitimate talents of her own... she was sexy, witty, beautiful, graceful and gifted in song and dance. The music soundtrack became a character in it's own right, with future legends Fats Domino, Eddie Cochran, Julie London, Ray Anthony, The Platters and Little Richard (who also sings the title song) all performing in person and playing themselves. The supporting cast is great too, including Tom Ewell and Edmond O'Brien.


"The Girl Can't Help It"- movie trailer
Posted by Travis Simpkins at 9:00 PM