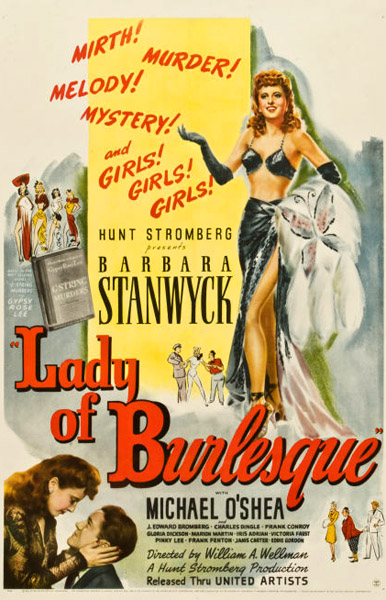 Although more than tame by today's standards, Lady of Burlesque (1943) was shocking to some viewers upon it's release. For them, the sexy, scarce outfits, dancing, splits and cartwheels, along with the backstage Burlesque banter proved to be too much. Based on stripper, Gypsy Rose Lee's novel The G-String Murders, the film is enjoyable and interesting when considered in the context of the 1940s.
Barbara Stanwyck plays a smart-ass dancer, Dixie Daisy, at a popular Burlesque Hall.

On stage, the girls run through catchy numbers, designed to capture the fancy of the masculine audience.

The dancers spend their time between performances gossiping backstage and messing around with the male comedians that accompany them in the stage act.

Rivalries and jealousy arise with the arrival of the Princess, a stunningly beautiful Burlesque performer, who is a tad arrogant.

All the fun and games comes to a screeching halt, however, when one of the girls is murdered in her dressing room, strangled with her own G-string. Havoc and suspicions are let loose with the ensuing police investigation.

Adding further turmoil to the already tense atmosphere, the Princess is murdered as well...

Dixie Daisy and the group know that one amongst them is the murderer. It's up to them to catch the maniac before he or she strikes again...

Posted by Travis Simpkins at 11:30 PM