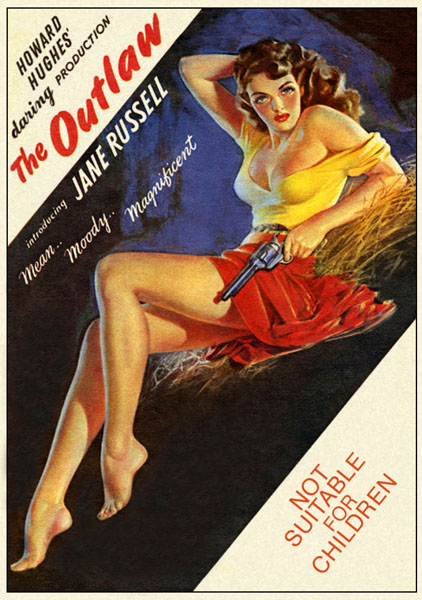 Shot in 1941, The Outlaw wasn't allowed to be shown in theaters until 1943. Even then, it was pulled shortly after it's release, banned, and was not given a decent chance with audiences until after WWII in 1946. What was the problem? The hangup? The reason to be bashful?... quite simply... Breasts! Howard Hughes' apparent fascination with Jane Russell's chest drove the censors crazy. It may seem trivial now, but in the early 1940s, such things were very taboo. The Outlaw is often cited as an example in discussions on the dangers of censorship, and, if for no other reason than that, it has earned a well deserved place in film history.

Doc Holliday has come to Lincoln, NM is search of his stolen horse. It is soon learned that the thief is none other than Billy the Kid. In a showing of mutual respect, the two become friends (but argue over the ownership of the horse throughout the film). When Billy is shot and wounded by Pat Garrett, Doc takes Billy to his ranch to recuperate. Doc's beautiful girlfriend, Rio, played by Jane Russell,  provides medical care for the wounded Billy despite her hatred for him.

While Doc is away, the nurse/patient relationship quickly becomes a love affair.

Upon hearing of the betrayal, Doc is not pleased. The rest of the film carries the characters through a psychological maelstrom as they try to elude Pat Garrett and try to come to terms of trust amongst each other...

Posted by Travis Simpkins at 12:30 AM