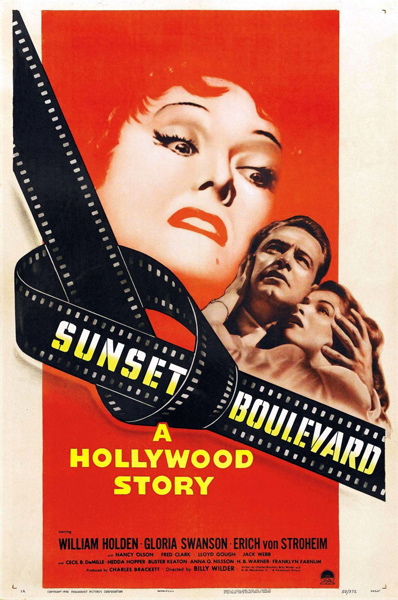 One of the greatest films ever made, Sunset Boulevard (1950) contains all the elements needed for success. An air-tight script, expert direction, great cinematography and perfect casting (particularly with Gloria Swanson and Erich Von Stroheim) all fall into place and form a cinematic masterpiece. Controversial in it's depiction of Hollywood business and it's habit of using up talent and throwing it away, it is both an interesting time capsule and still holds relevance today.
William Holden plays Joe Gillis, a down-and-out Hollywood screenwriter. While running from creditors and repossession agents, he gets a flat tire and pulls into the garage of an old dilapidated mansion. Turns out it is the home of Norma Desmond (Gloria Swanson) a has-been former silent movie star that hasn't accepted the fact that her career is over, still seeing the cameras that have long since stopped rolling.

Still living in the past, she revels in her "stardom" and imagined adulation (encouraged by her butler, played by Erich Von Stroheim).

In need of a job, Gillis reluctantly accepts her offer to have him edit her tediously bad screenplay. Thinking it'll be easy money, he strings her along and takes the free ride.

It is quickly realized that Desmond's interest in Gillis is more than professional, and he stays partly out of necessity, partly out of luxury and partly out of guilt (as she is constantly threatening suicide).

Meanwhile, true artistic ambitions to write and love mix when Gillis teams up with a pretty, young aspiring writer...

Desmond will not react well to this...

Posted by Travis Simpkins at 2:30 AM