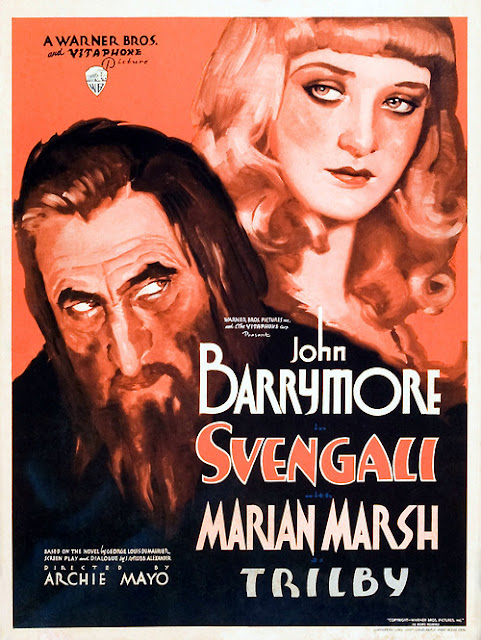 Ripe with great sets, harking back to the German Expressionistic era in film, Svengali (1931) is expertly shot, wonderful to look at and still holds up after eighty years. Full of psychological intensity, the film is both hypnotic and unnerving. Marian Marsh is perfectly innocent and graceful as Trilby, the victim to Svengali's mind control. John Barrymore, ever the artist, is especially great in this early talkie role. Svengali is a tragically under-appreciated masterpiece.


"There are more things in heaven and earth, than are dreamt of in your philosophy," are the words Svengali (played by the brilliant John Barrymore) deliver to one who questions his power. Svengali is a composer and music instructor, living in Paris, who uses mind control through hypnosis to control those he wishes to benefit from.


Looking to borrow money from his artist friends, Svengali stumbles across pretty young model Trilby (played by the adorable Marian Marsh) in their dwelling.


Svengali has an immediate physical attraction to her, and is dismayed that Trilby in falling in love with one of the painters instead.


Complaining of a headache one day, Trilby agrees to let Svengali cure her.


He uses his powers to hypnotize her, making her receptive only to him.


She breaks off the relationship she had with the artist (who fears she might have committed suicide, due to the nature of the note she left him) and follows Svengali on tour. They play the biggest, best Opera houses in Europe and are a huge success.


When their tour brings them back around to Paris, the artist goes to the show, curious to see if Svengali has changed. To his dismay, he discovers Trilby is not only alive, but is being manipulated and controlled by Svengali. He vows to put a stop to it and follows them wherever they go. Meanwhile, Svengali's health is failing, and the weaker his physical condition the less control he has over Trilby's mind, leaving hope that she may be released from his hypnotic hold...