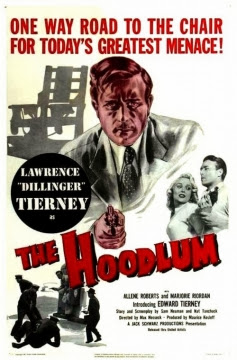 Most modern audiences remember Lawrence Tierney as Joe in Reservoir Dogs, or as Elaine's father on Seinfeld. Tierney had a successful run in the 1940's and 50's as well, playing mostly criminals. The Hoodlum (1951) is a good example from this earlier period in his career.
Tierney plays a career criminal who has recently been released from prison.

He would not have gotten out had it not been for the pleas of his elderly mother.

He gets a job working at his brothers gas station. Bored and jealous of his brother, he steals his brother's girlfriend, impregnates her and refuses to get married. This causes the girl to commit suicide.

The bank across the street proves too tempting for the ex-con, and he plans a heist with some of his criminal buddies.

He flirts with a secretary who works at the bank, knowing that she will provide useful information.
Their plan seems perfect, but a minor slip-up creates a landslide of havoc.

With the money in hand, the conspirators start to turn on Tierney. His family will no longer help him. He is on his own.

The man hunt is on... will he escape, return to prison, or fight until the end?