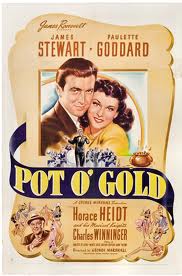 Despite it's lame title and somewhat less than stellar musical numbers, Pot O' Gold (1941) does possess some redeeming qualities... mainly Jimmy Stewart as his likable everyman character, and the beautiful Paulette Goddard as his love interest.
Jimmy Stewart plays a music store owner in a small town. The business is doing poorly and is on the verge of being closed for back payments.

When Jimmy's uncle, a well-to-do factory owner, offers him a job, he is left with little choice but to take it. He journeys to the big City, accepting his new role, but still carrying his love for music.

Turns out there is a feud going on between his uncle and the neighbors of the factory, who own a dwelling his uncle wishes to acquire so he can expand the factory. These neighbors play loud band music and constantly drive the uncle nuts. One of the residents of this house, the lovely Paulette Goddard, quickly captures Jimmy's interest.

Lot's of amusing scenarios take place (including Jimmy himself, trying to convince his uncle he is going insane).

In the end, the likable Jimmy must figure out a way for these neighborly tensions to cease, so that they all might prosper and he can have the girl.

Posted by Travis Simpkins at 2:30 AM