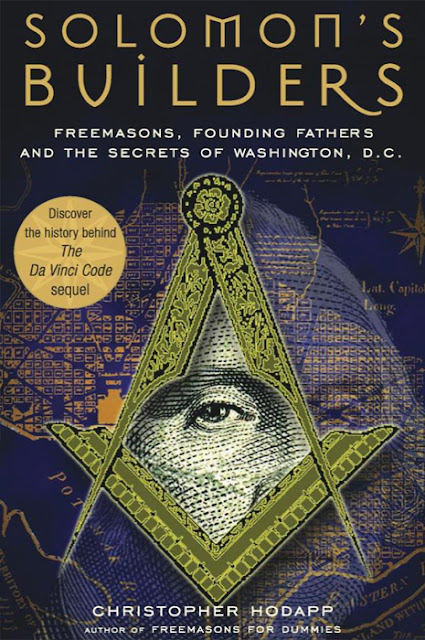 Prior to the formal 2009 release of his bestselling novel, The Lost Symbol, author Dan Brown hinted that the subject would focus on the Freemasons and Washington, D.C. Some Masonic authors and historians felt that, given Brown's tendency towards sensationalism, a preemptive strike might help to clear up any falsehoods and misrepresentations contained in the forthcoming book featuring Brown's popular mystery-decoding protagonist, Robert Langdon.
Christopher Hodapp's well-researched 2007 book, Solomon's Builders: Freemasons, Founding Fathers and the Secrets of Washington, D.C. offers a sense of the real history behind the founding of the United States and it's interwoven fit within the often-downplayed subtext of Freemasonry. Hodapp, himself a 33° Mason, focuses on the Masonic principles that provided the framework for many of our Nation's most cherished fundamentals... including freedom of religion, civil rights, voting and equality. Hodapp points out what other mainstream authors fail to recognize: "Freemasonry was the firstborn son of the Enlightenment, and it was a greater single influence on our Founding Fathers than any other."
The book traces the concept of a free-thinking Utopia or New Atlantis, conceived by Thomas More and Francis Bacon, through the hard-battled Revolution that formed the United States of America in the 18th Century, to the present day. A prologue involving the November 4, 1752 initiation of George Washington into the order of Freemasons at Fredericksburg sets the stage for a fortuitous series of events… in which our First President (and America's most famous Mason) plays a key part.
Expertly written, with Hodapp's keen sense of humor present throughout, the book offers readers an open door to further light. Many topics and historical figures are covered (far more than can be mentioned here), including the Sons of Liberty, Paul Revere, John Hancock, Pierre Charles L'Enfant, Benjamin Franklin, Andrew Jackson, ceremonial laying of cornerstones, symbolism of the Great Seal, hidden Masonic symbols in the street layout of the the Capitol, Ancient Greek and Roman influences, Egyptian motifs, Albert Pike and the 33° Scottish Rite House of the Temple. Guides to artwork and Masonic-influenced buildings are featured, including the United States Capitol, the White House, the George Washington Masonic Memorial, the Washington Monument and various Masonic Lodge buildings in the D.C. area. Well worth the cover price, the book provides an intriguing 291 page sojourn through Masonic American History.