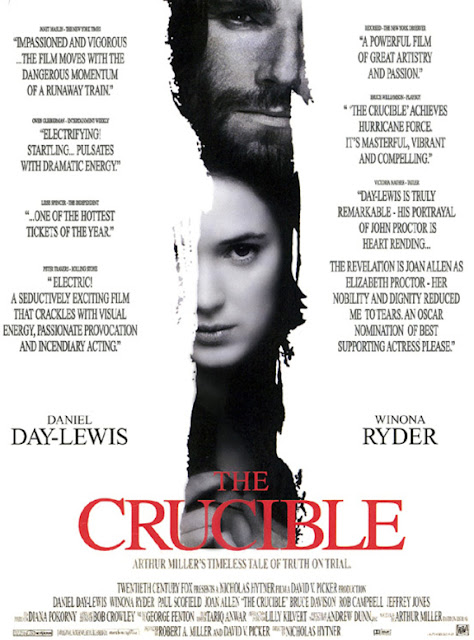 Directed by Nicholas Hytner, and written by Arthur Miller (based on his own classic 1953 play), The Crucible (1996) is an allegory of 1950's McCarthyism and the related blacklist. Set in 1692 Salem, Massachusetts Colony, the semi-fictionalized story focuses on the mania and paranoia surrounding the unfounded witchcraft accusations and wrongful hangings during the infamous Salem Witch Trials. After young harlot Abigail Williams and a group of young girls are caught enacting a ritualized dance in the woods by the local Reverend, all hell breaks loose… and a demonic examination/inquisition is called, with petty grievances leading to false accusations amongst the Salem townsfolk looking to save themselves from the noose. Wonderful set and costume design shows careful attention to 17th Century historic detail. Daniel Day-Lewis is great as John Proctor. Winona Ryder is enchanting as Abigail Williams, the source of the witch-mania. The supporting cast is good as well, including Paul Scofield, Jeffrey Jones, Rob Campbell and Joan Allen.