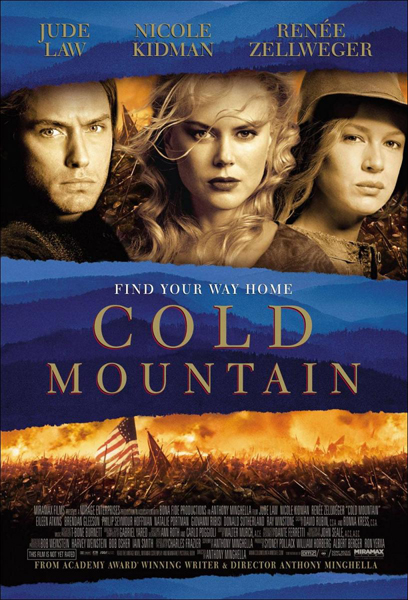 Written and directed by the late Anthony Minghella, based on the novel by Charles Frazier, Cold Mountain (2003) was a sleeper hit, proving to be one of the best films on the decade, and grossing over twice it's budget. Focusing on a Confederate Army deserter trying to find his way back to his love towards the end of the American Civil War, Cold Mountain is all-together beautiful, sweeping and epic. The cinematography is crisp and the 1860's period detail is fitting. Nicole Kidman is elegant, strong and sensual throughout the film. Jude Law is resilient in his lead role. Renee Zellweger earned an Oscar for her tough supporting role. Natalie Portman and musician Jack White (of the White Stripes) have small, but good parts. The rest of the cast is great as well, including Brendan Gleeson, Donald Sutherland, Giovanni Ribisi, Ray Winstone, Lucas Black, Cillian Murphy, James Gammon, Taryn Manning and Philip Seymour Hoffman.


Posted by Travis Simpkins at 4:30 AM