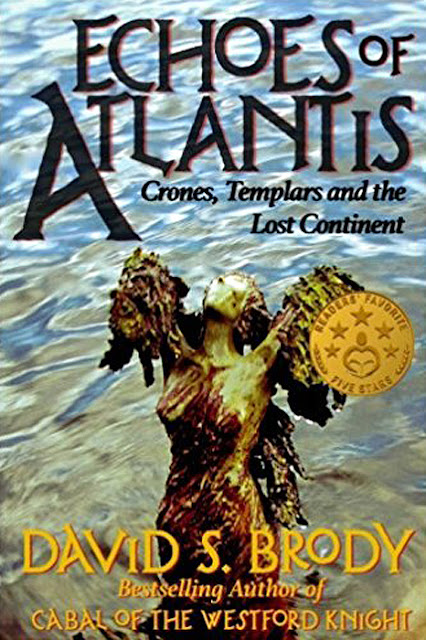 Echoes of Atlantis is the sixth book in David S. Brody's "Templars in America" series, and for all intents and purposes, essentially picks up where The Isaac Question left off… continuing the story of protagonist couple Cameron Thorne and Amanda Spencer as they investigate the secret pre-Columbian history and artifacts of North America. However, it is also very much a stand alone novel and can still be thoroughly enjoyed without prior reading of the first five installments in the series.
The plot only hints at the author's usual Templar material, focusing instead on the lost continent of Atlantis, providing observations on potential links between the legendary sunken landmass and archaeological sites like Gobeki Tepe in Turkey, Baalbek in Lebanon and the Sphinx in Egypt. Along the way, interesting parallels are drawn between various groups on opposite sides of the ocean with shared flood mythologies. To discuss the plot further would be an injustice to the many surprises contained within the book's pages.
Like in his previous work, David S. Brody assembles a collection of artifacts related to the ancient exploration of America long before Columbus and weaves a fast-paced thriller around them in expert fashion. This book mentions the Red Paint People skeletons, the Frost Valley Petroglyph, ancient cave art in Lascaux and Altamira, the Venus of Dolni and a Burrows Cave artifact. There are surprisingly few references to the Freemasons this time around, but Brody's beloved New England sites like America's Stonehenge and the Newport Tower appear briefly. Both informative and entertaining, this book (along with Brody's other work) is deserving of praise and more wide-spread attention.