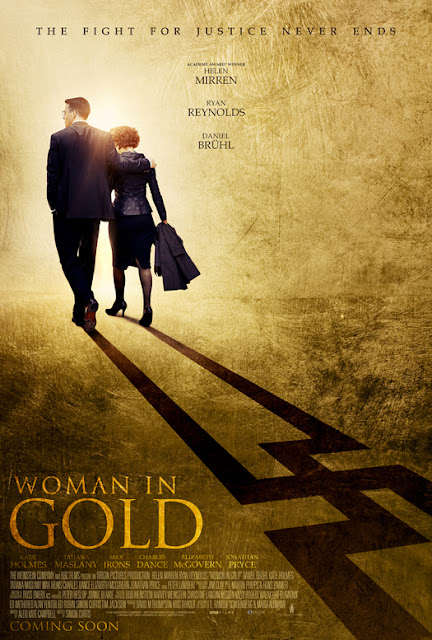 Directed by Simon Curtis, and written by Alexi Kaye Campbell, Woman in Gold (2015) tells the true story of the efforts of lawyer E. Randol Schoenberg to restitute Gustav Klimpt's famous "Portrait of Adele Bloch-Bauer" to Maria Altmann, the niece of the painting's subject. During the arduous legal process beginning in 1998, Schoenberg and Altmann sued the Austrian government for ownership of the $100 Million masterpiece and won the 2006 verdict, despite the odds being against them. Five Klimpt paintings had been taken from Mrs. Altmann's childhood home in Vienna by the Nazis during World War II, and had hung in Austria's Belvedere Gallery for the subsequent 50 years. The production provides a good platform, drawing attention to the many unresolved cases of artwork looted by the Nazis, and the restitution process of reuniting these works with their rightful owners. The film offers a great sense of time and place, alternating between WWII Austria and 1990's Los Angeles, with vibrant and well-composed cinematography. Helen Mirren is superb as Maria Altmann. Ryan Reynolds is good as E. Randol Schoenberg. The supporting cast does a fine job as well, including Katie Holmes, Daniel Bruhl, Tatiana Maslany, Max Irons, Charles Dance, Elizabeth McGovern and Jonathan Pryce.