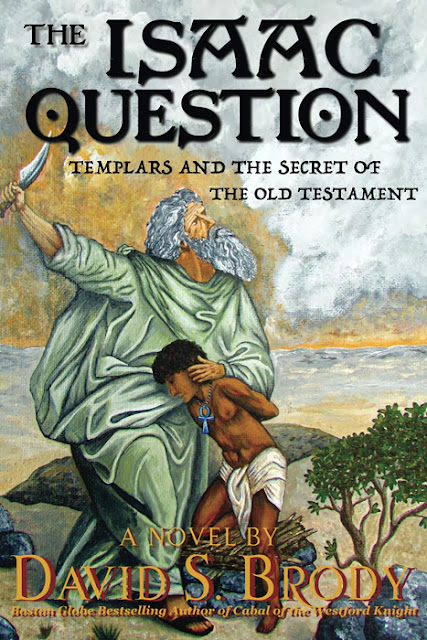 The Isaac Question
Templars and the Secret of
the Old Testament
by David S. Brody
Eyes That See Publishing, 2015
Notes by Travis Simpkins

The Isaac Question is the fifth book in David S. Brody's "Templars in America" series, and for all intents and purposes, essentially picks up where The Oath of Nimrod left off… continuing the story of protagonist couple Cameron Thorne and Amanda Spencer as they investigate the secret pre-Columbian history and artifacts of North America. However, it is also very much a stand alone novel and can still be thoroughly enjoyed without prior reading of the first four installments in the series.
The plot revisits the author's usual Templar material and adds further focus and new observations on potential links between the old Testament figure Moses, the Pharaoh Akhenaten and the mysterious Baphomet head so revered by the Templars. Along the way, interesting parallels are drawn between various groups... like the Druids and the Freemasons, for example. To discuss the plot further would be an injustice to the many surprises contained within the book's pages.
Like in his previous work, David S. Brody assembles a collection of artifacts related to the European exploration of America long before Columbus and weaves a fast-paced thriller around them in expert fashion. This book mentions many stone chambers in the northeastern US, Norumbega Tower, Roquepertuse, Gungywamp, Druid Hill, the Stone of Destiny, Cleopatra's Needle in New York, Kent Chamber, Balanced Rock and the Vermont Beltane Stone. Particularly intriguing are the scenes which play out in the House of the Temple in Washington, D.C. and around the Apprentice Pillar at Rosslyn Chapel in Scotland. Also included are many references to the Freemasons and Brody's beloved New England sites like America's Stonehenge, the Westford Knight and the Newport Tower. Both informative and entertaining, this book (along with Brody's other work) is deserving of praise and more wide-spread attention.