"A Place in the Lodge: Dr. Rob Morris, Freemasonry and the Order of the Eastern Star" by Nancy S. Theiss 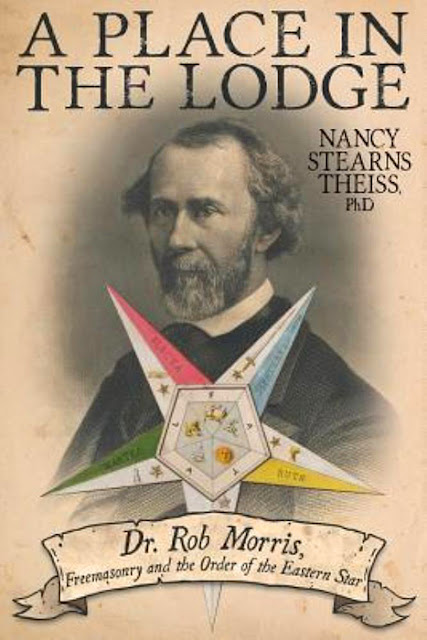 A Place in the Lodge
Dr. Rob Morris, Freemasonry and
the Order of the Eastern Star
by Nancy Stearns Theiss, Ph.D.
Dog Ear Publishing
Notes by Travis Simpkins

In A Place in the Lodge: Dr. Rob Morris, Freemasonry and the Order of the Eastern Star, historian Nancy Stearns Theiss, Ph.D. expertly utilizes transcribed family letters to paint a vivid picture of the daily life and struggles of the Morris family in the mid to late 19th Century. From humble beginnings and grassroots fundraising, Rob Morris' passion for Freemasonry and respect for the Women's Movement combined when he conceived of the Order of the Eastern Star in the winter of 1850. Inspired by various French degrees that permitted the initiation of both men and women, Morris developed a wholly original Adoptive Rite system centered around five heroines of the Holy Bible. Initially met with resistance and ridicule, the Order of the Eastern Star has flourished for nearly 170 years and currently has 430,000 members in 4,600 Chapters around the world. The OES International Headquarters is located in Washington, D.C.
The book follows Dr. Rob Morris from his initiation on March 5, 1846 at Gathright Lodge No 33 in Oxford, Mississippi to his job as Principal at Eureka Masonic College, known as the Little Red Schoolhouse, where he wrote the first Eastern Star Ritual. Correspondence details the international journeys Dr. Morris enjoyed as a Masonic Lecturer and author, which brought him all around the United States, Canada, Europe and culminated with a seven month stay in the Holy Land (where he established the first Masonic Lodge in Jerusalem). Along the way, he received numerous honors, found time to serve as Grand Master of the Grand Lodge of Kentucky, worked to standardize Lodge ritual and wrote over 400 Masonic poems. His poetry led to him being crowned the "Poet Laureate of Freemasonry for the 19th Century" in 1884.
There is some grit along with the glory, however, with tidbits about epidemics, fires and steamboat accidents providing a sobering backdrop of 1800's reality for all of his Masonic accomplishments. A fascinating book, all the way through, this would make a wonderful addition to any Masonic library.