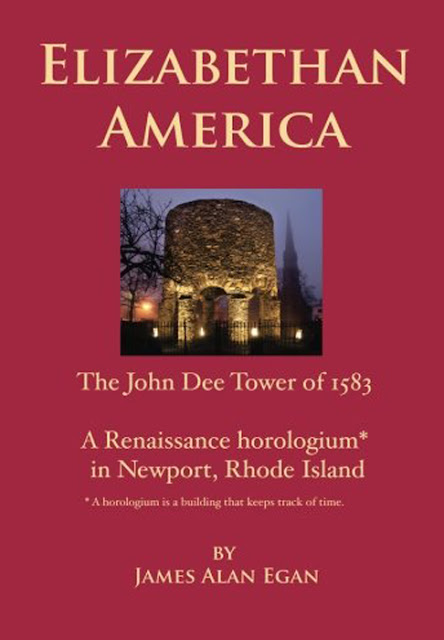 Situated in Newport's Touro Park, the structure referred to as the "Old Stone Mill" or more simply "The Newport Tower" has been a source of mystery for more than a few centuries. Various theories have attempted to explain the origin and purpose of the Tower. The most common explanation is that what we see there is the remains of a 17th Century Colonial windmill. It has also been suggested that the Tower is several hundred years older, having been built by the Vikings, the Chinese, the Portuguese or even by Scottish nobleman Prince Henry Sinclair along with remnants of the Knights Templar. Perhaps the most grounded and sensible explanation, however, comes from researcher James Egan. He has been studying the tower for two decades and operates the adjacent Newport Tower Museum on Mill Street. In his book, Elizabethan America: The John Dee Tower of 1583, Egan summarizes the conclusions he has reached over the course of publishing numerous other books on the subject. The result is a fascinating and convincing argument that neither challenges nor supports the notions of Pre-Columbian exploration of America needed to prove more far fetched hypotheses. Instead, the reader is presented with the evidence and asked to keep an open mind and draw their own conclusions.
Egan's scenario plays out in the late 16th Century and focuses on mathematician and occult philosopher Dr. John Dee as the architect of the Tower, which he suggests was built on a subsequent voyage, serving many purposes as both a celestial observatory and a welcoming monument for the planned British Empire of Queen Elizabeth. On page 65, Egan writes, "I assert that the Tower that still stands in Touro Park was built by Anthony Brigham and his 1582 preliminary expedition. It was to be the city center of this grand first Elizabethan colony."
To give too much away here would be a disservice to this great text. Purchase the book to gain a thorough understanding of Egan's analysis of the complex design of the Tower, which centers heavily on mathematics, astronomy and Monas symbology. Also posted below is a video presentation, in which Jim Egan summarizes his research on the subject.