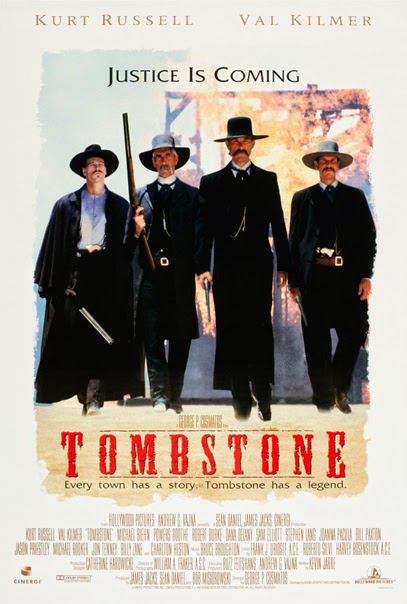 Directed by George P. Cosmatos, and written by Kevin Jarre (who was also the original director, but was fired early on), Tombstone (1993) remains the definitive film version of the Earp/Holliday/Cowboy gunfight at the OK Corral and one of the best Westerns ever made. After Cosmatos' death, star Kurt Russell claimed that he actually directed the film himself, but it is debatable. The story starts with the Earp brothers' arrival in Tombstone, Arizona, and their feud with the outlaw cowboys in town leading up to the gunfight at the OK Corral, it then follows Wyatt Earp on his vendetta ride after the murder of his brother. The production is vibrant and action packed. A modern Classic. The ensemble cast is excellent, including Kurt Russell as Wyatt Earp, Val Kilmer as Doc Holliday, Sam Elliot as Virgil Earp, Bill Paxton as Morgan Earp, Powers Booth as "Curly Bill" Brocius, Michael Biehn as Johnny Ringo and Dana Delany as Josephine Marcus. The supporting cast is great as well, including Billy Bob Thornton, Charlton Heston, Jason Priestley, Thomas Haden Church, Stephen Lang, Billy Zane, Harry Carey Jr., Frank Stallone, Buck Taylor and Joanna Pacula. Robert Mitchum narrates and Bruce Broughton provides a memorable musical score.


Posted by Travis Simpkins at 3:00 AM