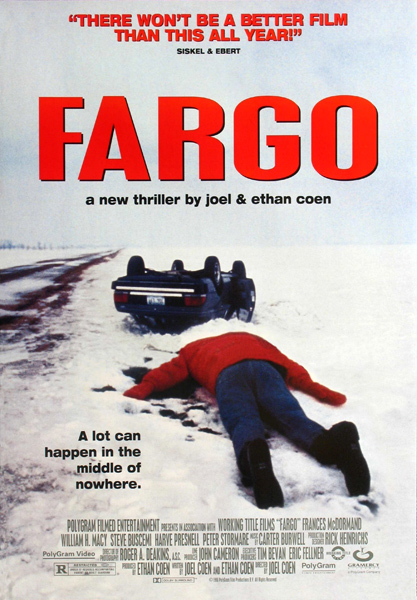 Certain films are able to perfectly capture the mood and atmosphere of Winter. With it's depictions of the desolate snow-covered landscape, and it's foreboding aura, Fargo (1996) does just that.


Jerry Lundegaard is in trouble financially. He is desperate.


His monetary woes have forced him to come up with a drastic plan to have his own wife kidnapped, then have his father in law unwittingly pay the ransom.

Jerry hires two bumbling thugs to undertake the part of snatching his wife.


Nothing goes according to plan.


The abduction is sloppy, and in the process of escape, the two criminals are pulled over by the police.


The police officer and two bystanders are killed, victims of being in the wrong place at the wrong time. Here, enters the film's main heroine... police chief Marge Gundersen.


Through her diligent and persistent efforts, the story behind all this mischief begins to unravel. The ransom is paid, but the amount was more than Steve Buscemi's character had anticipated.


He is wounded and angry.


Tensions are growing between the two abductors...


Will Sheriff Gundersen be able to handle this dilemma that is getting out of control? How will the situation be resolved?